Won’t somebody *please* think of the validity?

I’ve concluded that they’re right. Mobile phones DO addle the brain. They DO interfere with competent cognition. They DO cause people to become rambling, incoherent, and negligent thinkers, and to talk ever-more-ridiculous garbage. But their effects are quite subtle. They cause this result in some people simply by existing: all these folks have to do is think about cell phones and they become nonsensical.

Especially if their job is to write news headlines on such matters, or to otherwise fill content on the media’s health pages.

Have a look at this headline: END_OF_DOCUMENT_TOKEN_TO_BE_REPLACED

Happy Meals make you unhappy? Not so fast…

So here is even more scientific research into the non-obvious consequences of eating junk food. As regular readers will know, we’ve recently heard of a couple of studies claiming that eating chocolate either (a) helps you lose weight or (b) helps you lose even more weight. Of course neither is true. Or at least neither study really enables such an inference to be drawn. Instead, the researchers and/or media seemed to merely jump to those conclusions (perhaps revealing their pro-choc biases by doing so).

Of course, not everyone is biased in favour of junk food. Oh no. Plenty of people are dead set against it. Lots, for example, have quite a negative view of fast (fried) food — such as hot dogs, French fries, and hamburgers — especially when they’re produced by large-scale multinational fast food chains. (At this point, it may interest you to know that the Wikipedia entry for ‘Big Mac’ is locked against new edits.)

I can’t say I disagree with the objectors. Such foods generally make you fat and unhealthy, being composed as they are of gratuitously enormous amounts of calories, saturated fats, cholesterol, and sodium. And while others might argue that people have a right to eat themselves silly if they want to, the type of fast food we’re talking about often appears to be targeted at people who are poorly equipped to understand the relevant health considerations. People such as kids, for example (yep, kids are people too). 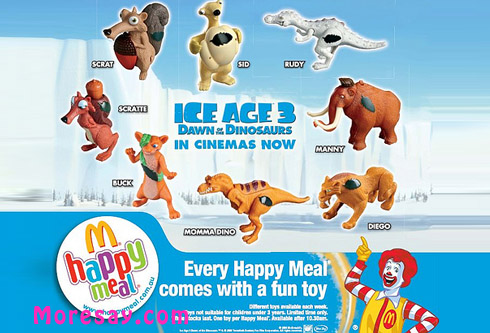 Obsessed with 'Ice Age 3'? Then why not eat a Happy Meal?

So when we hear news that eating fast food not only makes you fat and unhealthy, but also makes you clinically depressed, I guess we might be inclined to accept this at pretty much face value. After all, bad things are bad, aren’t they? Hmm. I know you want me to say ‘yes’. Well, erm, in this case at least, it’s unclear… END_OF_DOCUMENT_TOKEN_TO_BE_REPLACED