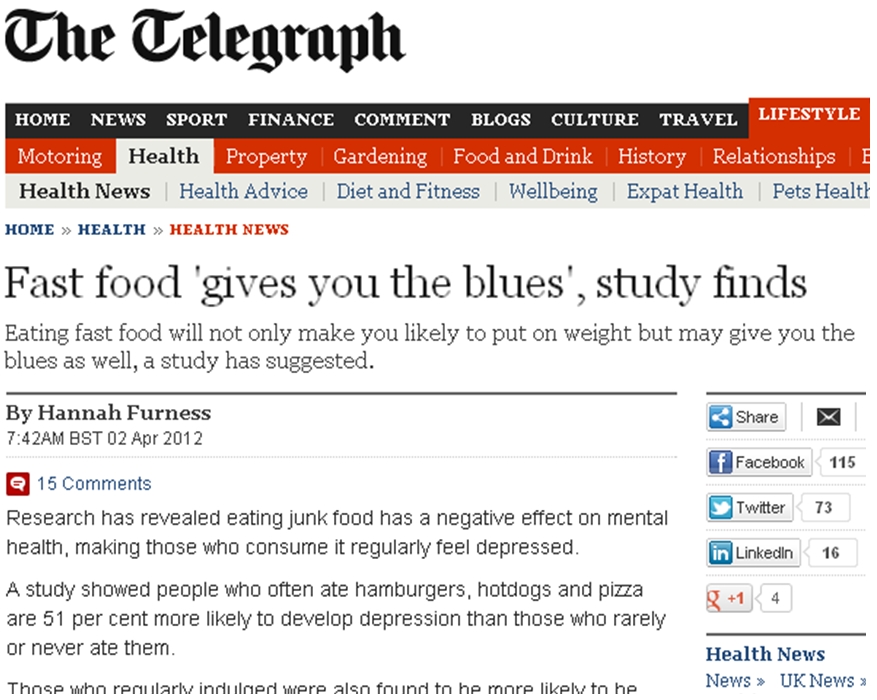 So here is even more scientific research into the non-obvious consequences of eating junk food. As regular readers will know, we’ve recently heard of a couple of studies claiming that eating chocolate either (a) helps you lose weight or (b) helps you lose even more weight. Of course neither is true. Or at least neither study really enables such an inference to be drawn. Instead, the researchers and/or media seemed to merely jump to those conclusions (perhaps revealing their pro-choc biases by doing so).

Of course, not everyone is biased in favour of junk food. Oh no. Plenty of people are dead set against it. Lots, for example, have quite a negative view of fast (fried) food — such as hot dogs, French fries, and hamburgers — especially when they’re produced by large-scale multinational fast food chains. (At this point, it may interest you to know that the Wikipedia entry for ‘Big Mac’ is locked against new edits.)

I can’t say I disagree with the objectors. Such foods generally make you fat and unhealthy, being composed as they are of gratuitously enormous amounts of calories, saturated fats, cholesterol, and sodium. And while others might argue that people have a right to eat themselves silly if they want to, the type of fast food we’re talking about often appears to be targeted at people who are poorly equipped to understand the relevant health considerations. People such as kids, for example (yep, kids are people too).

So when we hear news that eating fast food not only makes you fat and unhealthy, but also makes you clinically depressed, I guess we might be inclined to accept this at pretty much face value. After all, bad things are bad, aren’t they? Hmm. I know you want me to say ‘yes’. Well, erm, in this case at least, it’s unclear…

Today’s news stories, from media outlets all over the world, refer to research published in the latest issue of the scientific journal Public Health Nutrition. According to reports, the new study shows that eating fast food makes you depressed — independently of the depression caused by, say, slowly making you fat and killing you.

For example, here is the UK’s Daily Telegraph:

Research has revealed eating junk food has a negative effect on mental health, making those who consume it regularly feel depressed. A study showed people who often ate hamburgers, hotdogs and pizza are 51 per cent more likely to develop depression than those who rarely or never ate them…

The study, involving nearly 9,000 participants who had never before being diagnosed with depression, has now been published in the Journal of Public Health Nutrition.

The original study (conducted at the Universidad de Navarra in Spain) certainly did show that, of the 9,000 or so university graduates surveyed and then followed up after around half a year, those in the top 20% on a scale of fast food consumption were statistically more likely to be either diagnosed with or treated for depression at follow-up, when compared with those in the bottom 20%.

However, six months seems like an awfully short time-frame within which to observe a spike in depression onset in adults, especially when at baseline they were both young and not previously depressed; and, for that matter, when the study sample comprised a convenience sample of college graduates. It all just seems a little too good to be true.

Looking at the original study report, it’s clear that the research just doesn’t facilitate a simple burgers-are-bad interpretation. While the headline statistical association (between fast-food consumption and depression status at follow-up) is certainly there, there is also a whole bunch of other statistical associations that create enough noise to drown out any reasonable prospect of a signal. Even the Telegraph mentions some of them:

Those who regularly indulged [in fast food consumption] were also found to be more likely to be single, less active, smoke and work more than 45 hours a week.

Each of these factors, including that last point (working more than 45 hours per week), is suggestive of having a low socioeconomic status. This tallies with a further finding that fast-food consumers were also more likely to be unemployed.

So, in other words, the findings of the research are pretty simple — University graduates who, some time after graduating, find themselves in poor socioeconomic circumstances, are more likely (a) to eat fast food, and (b) to be depressed. Tell me about it. I’ve been that soldier.

Such a pattern of outcomes (even in a large sample) is simply insufficient to establish the causality that is implied by the newspaper headlines. What we have here is a third-variable problem, yet another variant of the correlation-causation fallacy. You see, both the purported cause and outcome are linked to a whole lot of other stuff too, creating a knot of concepts that is simply impossible to untie.

It’s a bit like saying that because you both sweat and feel tired after going for a run, sweating makes you tired. (Hint: it doesn’t.)

So no, while there are some interesting biochemical reasons to suspect a link between junk food and depression, we just don’t have the evidence for it yet. Not from this study anyway.

Which leaves us with a niggling question. Given that none of these food studies is actually that conclusive, why are they so regularly reported in the ways that imply that they are? In other words, why does the media think that chocolate makes you thin, but that Big Macs make you depressed? That’s an interesting issue in itself.

Nowadays, chocolate is largely an expensive treat beloved of the chattering classes, while burgers-in-a-box tend to be extremely cheap and popular among, well, folks who just aren’t very wealthy. Could it be that the chocolate-good/burgers-bad hypothesis betrays a degree of socioeconomic bias among the mainstream commentariat that so readily proposes it?

I know what I’d do if such protests were mounted, however.

One thought on “Happy Meals make you unhappy? Not so fast…” Leave a comment ›