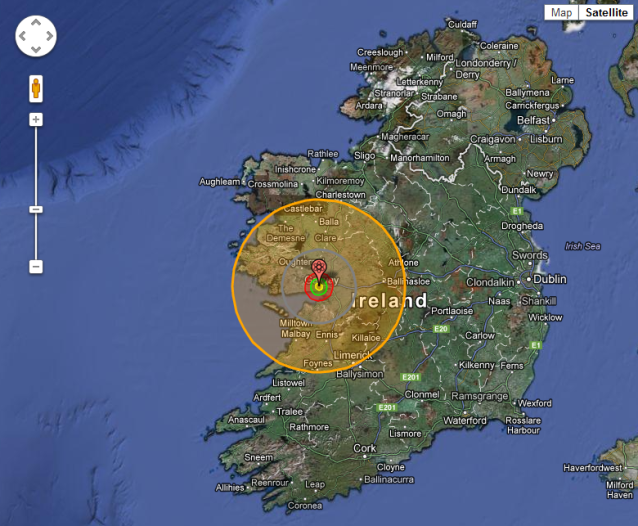 The other day, a live World War II hand grenade was found in a garden just down the street from my house. Thirty families were evacuated from their homes in the middle of the night while the army bomb disposal unit came along to do their stuff. This is very unusual around where I live. For one thing, Ireland wasn’t in World War II, so how there came to be leftover weaponry lying around is something of a mystery. Nonetheless, for those who could have been affected, it’s a little scary to think that a live hand grenade could have detonated in a suburban housing estate.

By coincidence, today I came across this website, which enables you to simulate a bomb explosion in any part of the world. And not just any old bomb explosion, but a nuclear bomb explosion. All you need to do is point the little red arrow somewhere on Google Maps, select your kiloton yield, and — as might be expected from a website-based apocalypse dashboard — click on a button marked ‘Detonate‘. And there you go. The software returns an image showing the blast radius in various concentric degrees of severity.

So I did what any red-blooded man in my position would do. I plonked the target right down on top of my own house, selected the biggest bomb available (the pimped-up 100-Mt version of the USSR’s Tsar Bomba), panned back so that I could see the full fallout, and then END_OF_DOCUMENT_TOKEN_TO_BE_REPLACED