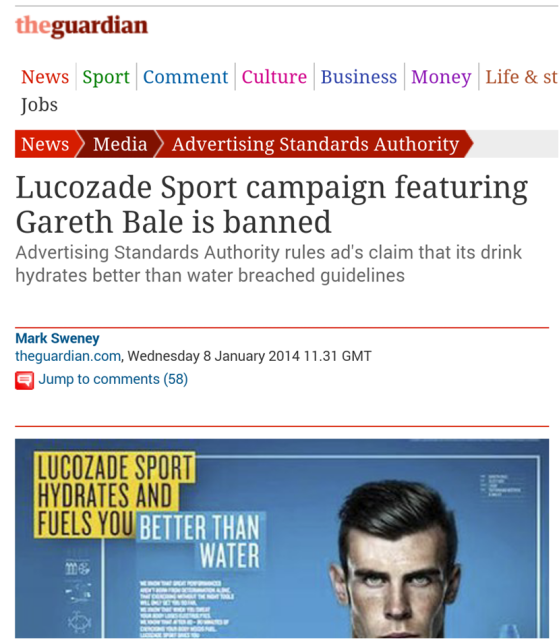 It turns out that Lucozade Sport doesn’t hydrate and fuel better than water after all. In the UK, our old friends the ASA have finally told them to quit saying so in their celebrity-laden ads. I guess it always did sound a bit iffy. I don’t think I was alone in thinking that hydration was essentially the process of adding water to stuff. The idea that you could improve on this by using something other than water always seemed, well, simplistic.

Well, it turns out there’s a Natural Hydration Council. (A council for the process of adding water to stuff. Naturally.) It was they who successfully lobbied the ASA to have the £9-million Lucozade ads pulled.

The ASA ruled that the assertion that the drink “hydrates and fuels you better than water” was not on the list of EU authorised health claims (yes, there’s a list). Nor was it covered by the UK Health Department’s “general principles on flexibility of wording for health claims” (yes, they exist too). While accepting the manufacturer’s excuse that their slogan was a hybrid of two allowable EU claims, the ASA decided that the change in meaning was such that most consumers would end up misunderstanding what was being alleged.

To be sure, there are subtleties. Carbohydrate-electrolyte solutions enhance the absorption of water you drink during exercise, but this is not exactly the same as the claim that it does so better than water itself (although the ASA were willing to allow that interpretation). Meanwhile the “fueling” concept, a notion that depends on the presence of sugary/carbohydrate ingredients, is self-evidently true, insofar as water doesn’t contain any sugar/carbohydrate elements.

So saying that this stuff “hydrates AND fuels better than water” leads to a bit of Boolean wordplay, in that:

To further complicate matters, the ASA did not accept the manufacturer’s defence that the single word “fuels” was synonymous with the EU-approved phrase “contributes to the maintenance of endurance performance during prolonged endurance exercise.” Funny, that.

Hmmm. These ads first appeared a number of years ago. So why all the fuss now? Well, we can thank the Natural Hydration Council for swinging into action. So kudos to them.

However, perhaps not all is as it appears. The Natural Hydration Council might sound like a civic body altruistically rooting for Citizen Underdog. But it’s not quite that. In fact, it’s an industry conglomerate made up of producers of bottled water. Folks like Danone, Nestlé, and Highland Spring. In other words, folks who stand to gain (in terms of market share and comparative reputation) whenever products like Lucozade Sport are publicly maligned.

Given that such bottled water companies have themselves been criticised for making dubious claims about the benefits of their own products (like the claim that bottled water is better for you than tap water), we can reflect on what this knee-high tackle on Lucozade Sport might actually be.

Could it be a group of corporate beverage tycoons using a statutory complaints process to publicly undermine a competitor?