As we all know, the old days were the best. You know. Ye olden days. This is what I thought when I received this tweet alert from @ClaireMcCallion earlier today:

It links to an article just out in the American Psychological Association’s house journal, Monitor on Psychology and yes, @ClaireMcCallion’s right, it does SCREAM pseudoscience.

This all reminds me of an incident many years ago, when the Monitor published another article about pseudotherapies in psychology. Essentially, that article soft-soaped the use of complementary/alternative approaches in clinical psychology and encouraged psychologists to collaborate with the National Council for Complementary and Alternative Medicine (NCCAM) in researching and developing CAM approaches.

Let’s remind ourselves, for a moment, that such therapies — by definition — (a) lack biological plausibility and are argued to operate using forces that are as yet inexplicable to mainstream science, and (b) have not demonstrated medicinal effects in ways that can be demonstrated in unambiguous, rigorous, empirical trials.

Nonetheless, back in ’04 I was in the habit of banging my letter-writing head off the brick wall that is the editorial offices of such publications. As per the following: 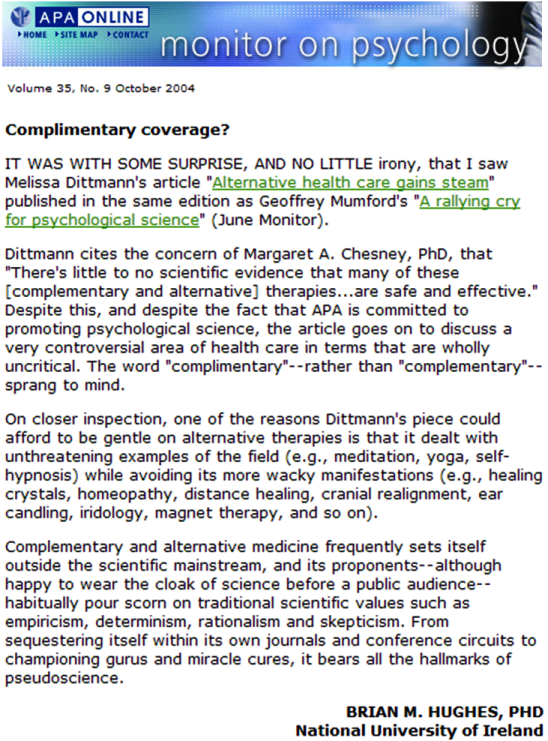 I subsequently wrote an extensive review of pseudo-psychotherapies, which was peer-reviewed and published in a high-impact psychology journal, and have recently prepared an updated review (on request) for Wiley-Blackwell’s forthcoming Encyclopedia of Clinical Psychology. Copyright being what it is, I can’t upload either of these here (but if you want to contact me via Twitter, you just never know what might happen…).

Anyway. I keep banging my head. The brick wall remains.

This month’s APA article offers encouragement to use a number of non-mainstream therapies, including the following notable examples (my comments in brackets):

An interesting feature of this article is that it is presented in the context of Continuing Education for professional psychologists. In fact, you can do a quiz on the subject matter in order to accumulate credit. Why not have a go yourself? Oh, because you have to pay actual money to do it. That’s why. Yes, the APA is going to charge you $35 to tell you you’re wrong when you accuse them of recklessly attributing credibility to dubious treatments by featuring warmly worded tributes to snake oil on their website.

The article contains a section on ethical implications of CAM, which includes reference to the need for psychologists to keep up to date with scientific literature and to explain to patients the basis for therapies being suggested. For example, ensuring patients can give ‘informed’ consent for Reiki would involve informing them that there is no basis for its claims. Which all just begs the question as to why this stuff is on the website at all. As noted above, several of the therapies have been debunked in various ways (far too extensively to detail here). The fact that lots of people like this stuff doesn’t justify its inclusion in such a forum.

Otherwise what’s coming next from APA? CE credits for lessons on how full moons are associated with increases in strokes? There’s literature on that, folks. If all you need to promote this stuff is some willing advocates, then, yes, literature can be found.

Don’t forget to add a bit that says “some people disagree” and “it is important to study these claims scientifically“, though. You know. For balance.

…in another nine years.