In the Irish abortion referendum, the ‘No’ side — those campaigning against the repeal of Ireland’s archaic Constitutional abortion ban — certainly had their work cut out.

The way the Constitution was worded meant they had to persuade the Irish electorate to defend all of the following: (a) forcing raped pubescent teens to carry unwanted pregnancies to term; (b) compelling incest victims to give birth to consanguineous offspring; (c) allowing critically ill pregnant women to bleed to death by making doctors too afraid to treat them; (d) trafficking parents whose unborn children have fatal foetal abnormalities to foreign countries in search of appropriate medical care, and then making them smuggle their cremated babies back to Ireland in hand luggage; and (e) threatening women who induce miscarriages in their own homes, or anyone who assists them in doing so, with a 14-year prison sentence for murder.

Ireland’s abortion ban had repeatedly been condemned. After several negative findings, the United Nations formally denounced Ireland in 2017 for adopting an approach that was “cruel, inhumane, and degrading.”

In other words, considering all the issues, the ‘No’ side had a difficult argument to sell.

So how exactly did they go about crafting the subtleties required to assuage voters’ concerns? How did they pitch their philosophical and ethical arguments to an increasingly sophisticated, critically aware, and well-read electorate?

Well, sit back and enjoy some hand-picked highlights from the ‘No’ side’s quite memorable campaign…

1. That time someone installed a giant ‘NO’ on Ben Bulben

Ben Bulben is a protected geological site in County Sligo. A mountain. Supposedly, a huge ‘NO’ installed on the side of a mountain was intended to persuade Ireland to put aside their reservations and vote to keep its internationally controversial abortion ban. 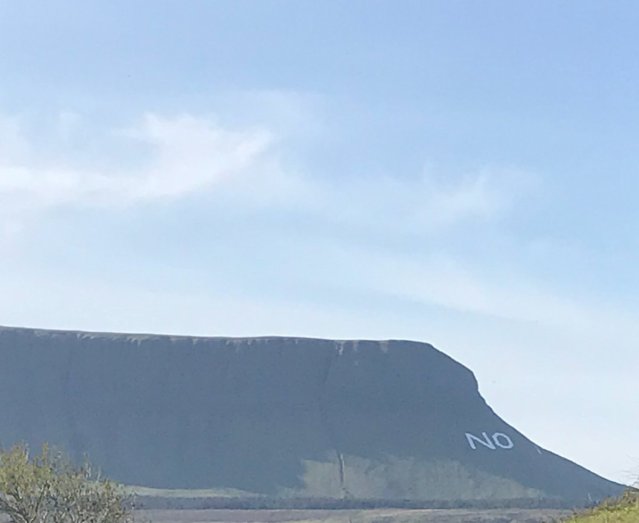 Sure, the ban produces terrible outcomes for women, their families, and wider society. Sure, the United Nations have condemned it. But a huge ‘NO’ installed on the side of a mountain? That really puts the whole issue into perspective, doesn’t it?

A ‘NO’ on Ben Bulben just makes you think.

Of course (spoiler alert), it turned out the Irish people are generally unswayed by moral argumentation conveyed on the sides of mountains. Seemingly they choose to prioritize women’s lives ahead of typographic masonry.

This became something of a running theme. 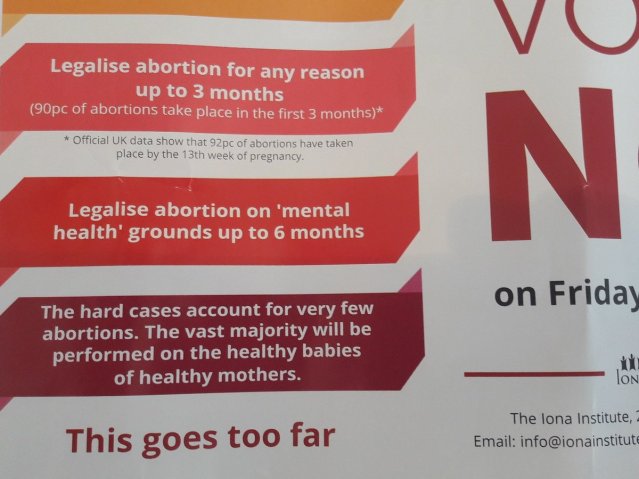 The Iona Institute is a right-wing conservative Catholic think tank. They specialize in promoting awareness of research findings that happen to coincide with their preferred moral worldview, as if to imply they adopt an evidence-based approach when deciding whether or not to love Jesus.

Prominent anti-abortion campaigner Rónán Mullen went so far as to say this type of thing — repeatedly — on national television:

In other words, mental health is all in the mind (you see what I did there?).

As Fionnuala MacLiam pointed out on Twitter, such a claim runs counter to the pro-lifers’ usual trope that abortion itself damages mental health, by inducing something they call post-abortion syndrome.

Too bad that post-abortion syndrome is a myth.

This angle amounted to little more than mental health denial.

3. That time the Bishop of Ossory told us that having an abortion after being raped is actually far worse an experience than the rape itself

According to his interview on national radio, he knows this because he heard it from some women he spoke to. 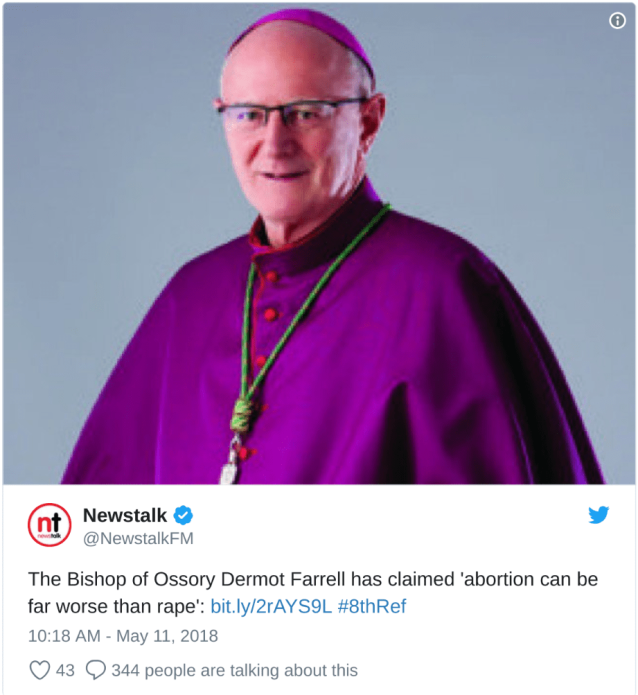 Coincidentally, this was the same day the Psychological Society of Ireland published a report stating that decades of research shows abortion does not hurt a woman’s mental health.

Presumably, however, rape does.

4. Or that time a pro-life parliamentarian suggested that mental health *was* important, and that women who have abortions could be considered de facto INSANE in order to receive reductions on their murder sentences

Er, yes. After spending weeks denying that mental health even exists, the ‘No’ side tried to switch the argument to imply that having an abortion was itself a sign of mental derangement. 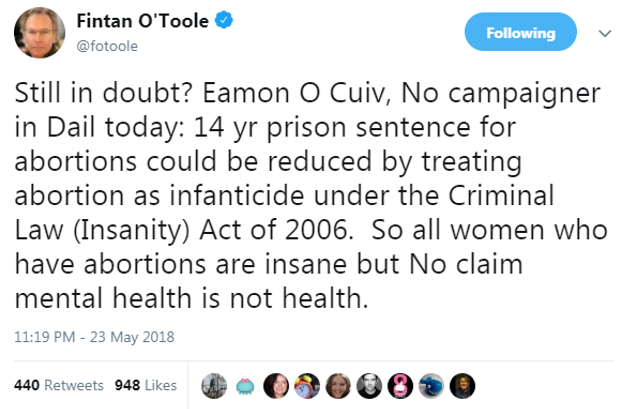 As a psychologist I admit this strategy particularly irked me.

Its contorted logic — presented to parliament by the grandson of our republic’s first President — epitomized entirely the systematic inter-generational stigmatization of Irish women that the Eighth Amendment issue had come to symbolize.

It also revealed the panic that gripped the pro-life movement when public opinion began to overwhelm them in the campaign’s final days.

In some ways the idea represents a kind of cognitive dissonance. These people think their own position is so compelling that anyone who holds a different view to them must be mentally unstable. They think that no right-minded person would ever have an abortion. They just don’t get it.

The fact these people’s own grasp of reality is so poor will remain a one of life’s pathetic ironies.

They will never get it.

5. That time a Life Institute spokesperson argued that abortion statistics were inflated because they included Irish women who were not white

Here she is again in all her glory:

Or, indeed perhaps, as people.

6. That time the director of the Iona Institute mysteriously claimed there were 18,000 GPs in Ireland…

…when there are actually just 2,500. He had wanted to play down the proportion who supported a ‘Yes’ vote.

What gives? Well it’s a bit of a mystery. But as Aoife Barry pointed out on Twitter, 18,000 GPS locations were mapped on an Irish website a decade ago…

Maybe that’s what he was referring to?

It is a fundamental tenet of the scientific method that correlational reasoning is parlous.

The fact that 1,300 GPs supported repeal AND 18,000 points of interest were added to global positioning-system maps in 2008 seems, in retrospect, a particularly unconvincing correlation on which to base an argument against constitutional change.

7. Or that time he seemed to describe female bodies as “our property”, warning that providing women with bodily autonomy was akin to “nationalising half the housing stock”

Here he is again: 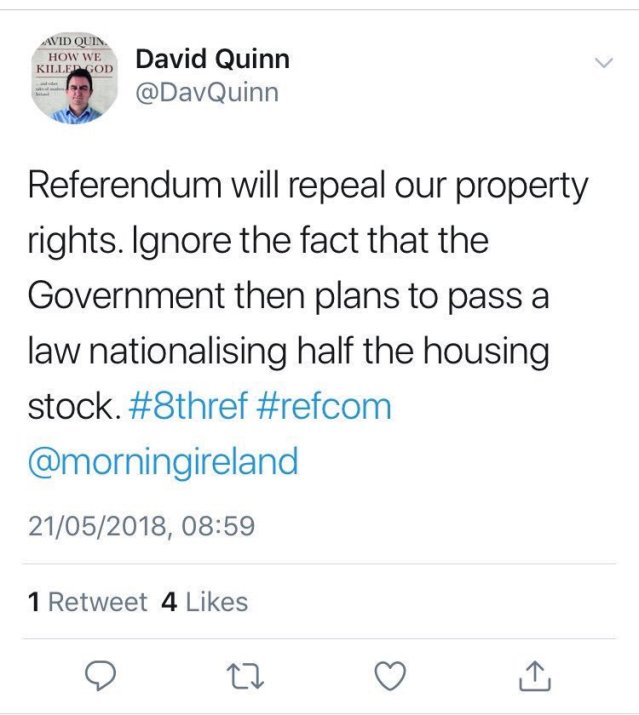 Cool the jets, snowflakes! David didn’t state that women’s bodies were men’s property. He merely implied that they were analogous to men’s property, because it was an analogy and that’s how analogies work.

8. That time the anti-abortion ‘Save the 8th’ campaign wheeled out a ‘psychiatric nurse’ who claimed to have assisted with abortions in an English clinic for five years but turned out actually to have worked just as a porter for 8 months…

…and who then — allegedly — misrepresented his qualifications by falsifying his certificates. 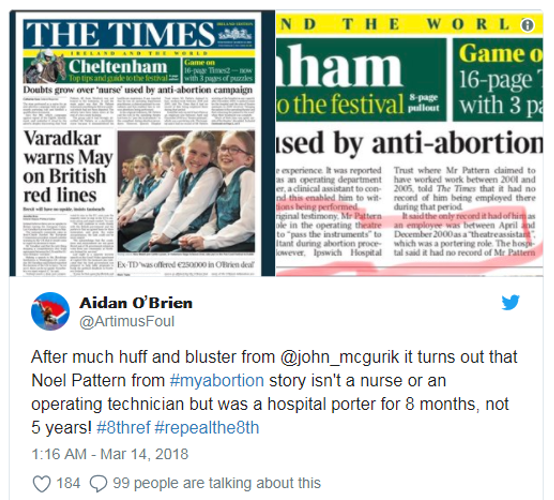 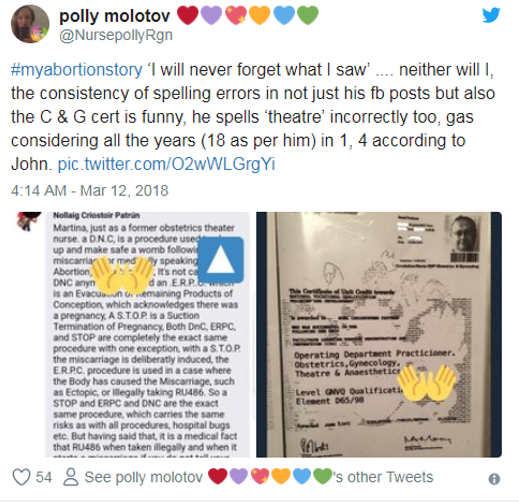 I think he was a member of the ‘Circulation Nurses with Fire Safety Training For ‘NO” group.

9. Or that time Save the 8th unlawfully used photographs of the Irish Defence Forces in press advertising, contrary to the Defence Act of 1954…

…in order to imply that while men can be trusted to protect children, women can’t. 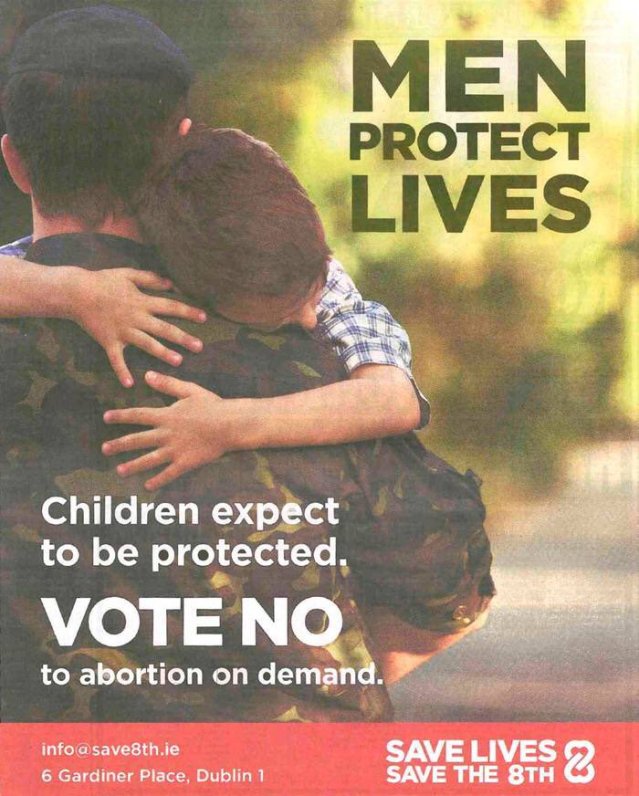 The illegal use of our nation’s defence forces to support subliminally misogynistic messages about female child-killers was intended to convince the electorate to jail women for 14 years on murder charges for taking abortifacient pills in their own homes.

I guess it wasn’t effective.

10. Or that time Save the 8th used photographs of an apparently incompetent firefighter…

…to further imply that babies need to be protected from, not just fire, but also women. 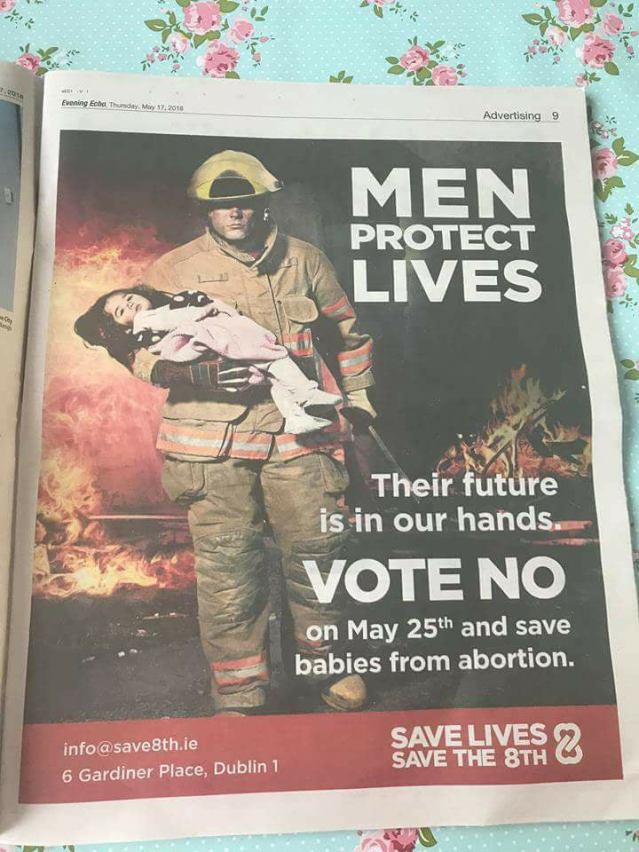 It was perhaps a tad unfortunate that the firefighter they used seemed to know little or nothing about firefighting. Contrary to even basic practice standards, he was carrying the child in one arm, wearing no oxygen mask, and had his visor up.

A sample lyric will capture the spirit of this haunting ditty for you: “Live and let live/In a land with Mammy and Daddy!”

The ‘No’ side didn’t just have this guy though, they also had Crystal Swing. And Jim Corr.

If the referendum had been a sing-off/dance-off/act-off, I know which side my money would have been on.

12. That time an anti-abortion campaigner told the Drogheda Independent that allowing abortion would eventually reduce the pool of available Gaelic Football players

Yes. He really said it: 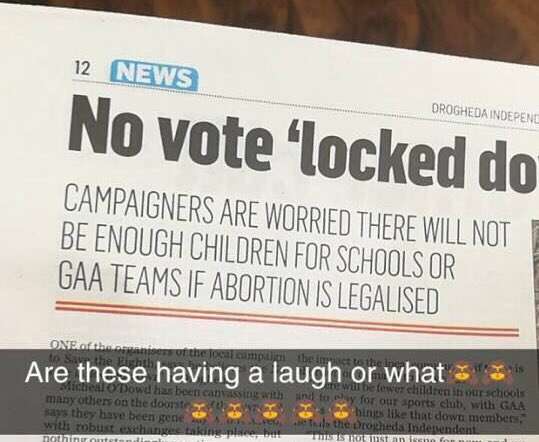 But at the end of the day, football is just a load of men kicking a bit of leather around a field, so I guess we’ll just have to get used to it.

13. That time a public representative declared on radio that repealing Ireland’s abortion ban would lead to:
(a) the normalization of sex slavery;
(b) euthanasia;
(c) 14-year-olds being forced to have sex on demand;
and
(d) political assassinations.
Oh, and (e): it would make Hitler “very” happy

That is certainly quite a lot of consequences.

Well our interview with Cllr Des Guckian has certainly caused reaction today – in which he claims sex slavery would be normalised if the 8th Referendum is passed, and the need for a return to ‘proper use of sex’ #Together4Yes #loveboth #8thAmendment pic.twitter.com/2xqblh0h3K

As a rider (if you will), he also offered this nugget of advice:

Mr Guckian also said Ireland should turn to a “culture of life” and to a “proper use of sex”.

This was the archetypal ‘slippery slope’ argument: Sure, the guy could be exaggerating. But could you really afford to take that chance? DO YOU WANT HITLER TO BE HAPPY? No, of course you don’t. Therefore, you must vote ‘No’.

Unless, of course, those various slippery slopes turn out to be illusory.

I suppose only time will tell now.

In the end, for some unbelievable reason, the Irish electorate were simply not swayed by all these powerful arguments…

Breaking News: Ireland voted to overturn its ban on abortion, the prime minister said, in the country’s latest rebuke to the Catholic church https://t.co/jhdLLnNJ9l

Voters in Ireland chant "yes" in Dublin Castle on Saturday while awaiting the results of the country's historic referendum on abortion. Ireland voted overwhelmingly in favor of overturning a 35-year-old ban on abortion. (Video: @karadaniellefox / CNN) https://t.co/WnLmycOhkX pic.twitter.com/IMDTFocUwu

Hmmm. I guess the Irish people have had enough of ‘experts’.

Democracy, folks. It’s out of control…