Social controversies are frequently seized upon by bigots. In Britain, for example, the immediate aftermath of the Brexit referendum saw a sharp increase in racist incidents, with reports of people being harassed on the street, jeered at in shops, and barracked at passport control in airports. There is even a name for this unleashing of gleeful bigotry. Paul Bagguley, a sociologist at Leeds University, calls it “celebratory racism.”

You see, racists do celebrate. They do so whenever they have some kind of ‘victory’, an occasion that allows them to revel in the sheer discomfort of mainstream society.

Psychologists will tell you that celebrations fulfil important social functions. They solidify social bonds, bolster the identity of the in-group, and communicate group-level encouragement to your fellows, especially during times of stress. In other words, celebration is itself a tool of social manipulation.

You celebrate in order to collaborate.

Celebratory racism, then, is team-building for bigots. A spontaneous outpouring of hysteria designed to advance the racist cause.

This week’s news from Oughterard — where protesters succeeded in blocking an accommodation centre for asylum seekers from being opened in their village — was greeted with people cheering at the village’s picket line. One reporter explicitly described the atmosphere as one of “celebration”.

The organisers of the Oughterard protests have repeatedly told journalists that they are not racists. Instead, their objections to the Direct Provision centre are described as relating to the “inhumane conditions for asylum seekers” that such a centre would offer.

But online, few people celebrating the outcome seemed concerned about the inhumanity of Ireland’s Direct Provision system. By and large, reactions were more along the following lines:

I actually gathered several similar examples, but in the spirit of not-feeding-the-trolls, I have decided against publishing them here.

But I will point out that they often included full-blown Nazi: 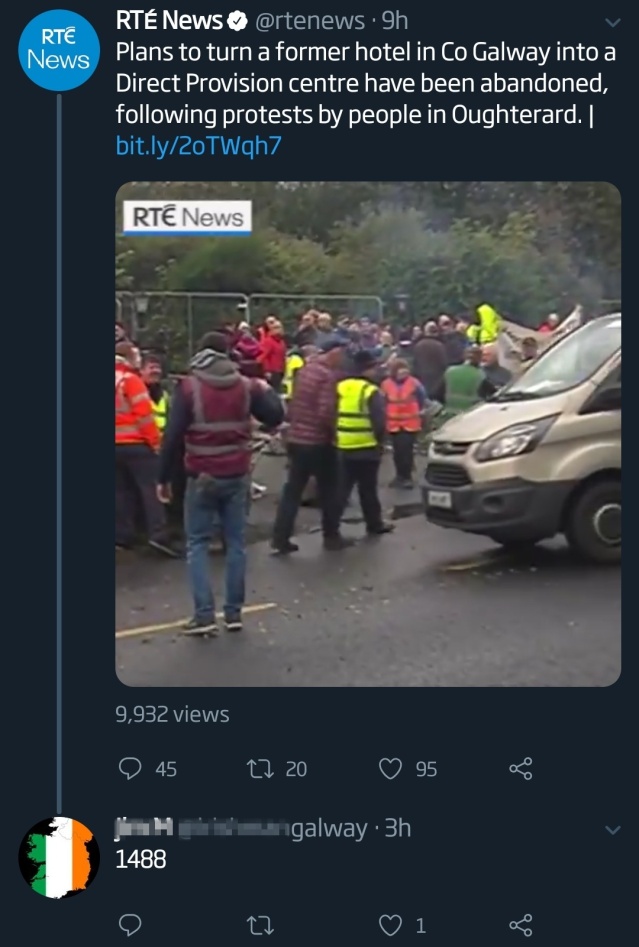 @RTÉNews: Plans to turn a former hotel in Co Galway into a Direct Provision centre have been abandoned, following protests by people in Oughterard | bit.ly/2oTWqh7

Readers not up to speed on neofascist semiotics might be wondering what “1488” even means. Here is an explanation from the Anti-Defamation League:

1488 is a combination of two popular white supremacist numeric symbols. The first symbol is 14, which is shorthand for the “14 Words” slogan: “We must secure the existence of our people and a future for white children.” The second is 88, which stands for “Heil Hitler” (H being the 8th letter of the alphabet). Together, the numbers form a general endorsement of white supremacy and its beliefs.

As such, they are ubiquitous within the white supremacist movement – as graffiti, in graphics and tattoos, even in screen names and e-mail addresses, such as aryanprincess1488@hate.net. Some white supremacists will even price racist merchandise, such as t-shirts or compact discs, for $14.88.

Fascists online often speak in code. They do it partly to disguise their views, partly to communicate with like-minded bigots on Twitter, but most of all they do it for fun. A bit of neofascist craic.

It’s the psychology of tribalism. The shared language, the codes and the symbols, even the high-vis vests, are all part of the social identity that ties these racists together.

Ordinary mainstream Irish people — including many good citizens of Oughterard who were so dismissive of anyone who criticised their protest — really do need to wise up.

We’re talking about white supremacists, expressing solidarity with you. Supporting your cause. Involving themselves in your meetings.

And participating in your celebrations.

Not only were the Oughterard protesters “jubilant” and in “high spirits” after news broke that the Direct Provision centre had been abandoned, they even organised a party to celebrate their ‘victory’ — at one point live-streaming it on their notorious Facebook page:

Michael Clifford in the Irish Examiner was appropriately judgmental:

The whooping and hollering was in bad taste. Last Tuesday, protestors outside the former Connemara Gateway Hotel near the village of Oughterard were letting it rip. They were thrilled that their two-week protest had succeeded.

The owner of the premises had bowed to pressure and withdrawn his tender to house a direct provision centre there.

The protesters claimed their glee was directed at the Department of Justice, the Government, the system. But the reality is that the spontaneous joy also sent a message to some of the most vulnerable people on the planet. Any asylum seeker aware of the scenario would be compelled to conclude that they were not welcome in Oughterard.

The on-the-ground protest organisers remain adamant that nothing could have been further from their minds.

The Oughterard protesters see themselves in a positive light. But their protests have undoubtedly energised a burgeoning fascist fringe in wider Irish society.

Last week we saw horrendous online attacks directed at a mixed-race Irish couple who appeared, with their child, in a supermarket advertising campaign.

The overlap with Oughterard was obvious to anyone who follows these events on social media. The trolls gloating about Oughterard were, by and large, the very same trolls who were attacking this family with online abuse and sneers.

Well done to the Ryans for speaking out, after such shocking treatment this week. Time for Ireland to get serious about racism. #LoveNotHate #LateLate #LateLateShow pic.twitter.com/v50XMxDYIo

As with Brexit, the mainstreaming of anti-immigrant discourse has consequences beyond the immediate moment. It lowers the social bar. It threatens to liberate a freshly enthused wave of public bigotry.

For a certain type of person, celebratory racism is addictive. When it comes to getting high on gleeful bigotry, these folks are complete junkies. It’s only a matter of time before they are looking for another fix.

So when exactly is Ireland going to get serious about racism?

It will need to be soon.

In the meantime, however, be prepared for more Oughterards.