A few questions thrown at @vp and @campaignforleo but no replies from either (and no greeting to the press from Pence either). pic.twitter.com/iIsot8Zq3P

It’s (groan) nearly St Patrick’s Day, and so the Irish prime minister is doing the usual in the US of A. But this time, there are some new elements. Specifically, the prime minister (the official title of his office is Taoiseach) is newly elected and performing these duties for the first time.

He’s already had the wonderful pleasure of meeting Trump. Now, protocol calls for a meeting with Vice-President Pence.

But this year, oddly, Pence has insisted on some new measures for the traditional meeting:

The much-anticipated meeting between Taoiseach Leo Varadkar and US vice president Mike Pence will be held behind closed doors.

Traditionally the St Patrick’s Day breakfast meeting between the Taoiseach and the Vice President is open to the media and their comments can be reported to the public.

However, on Friday morning the media will be prohibited from reporting the remarks of both leaders.

…It is understood the decision to bar the media was taken by the vice president’s Office.

Hmmm. Last year’s meeting between Pence and the previous Taoiseach, Enda Kenny, was — as always — open to the media. There were witnesses to what went on. Even photographs.

So do we really need to put on our thinking caps to figure out what is happening here?

Mr Varadkar is one of few openly gay world leaders…

…and Mr Pence has been criticised for his views on LGBT rights.

Here’s an overview from the New York Times:

Gay and transgender leaders said they were especially alarmed when Mr. Trump chose Mike Pence, who has a long record of opposition to gay rights, as his running mate.

“What we know about Mike Pence is that he led a direct, massive and concerted effort in the state of Indiana to deny equality to L.G.B.T. people,” Ms. Carey [Rea Carey, the executive director of the National L.G.B.T.Q. Task Force] said. “It’s not like Trump didn’t know who he was.”

As governor of Indiana, Mr. Pence opposed gay marriage and signed into law a bill that made it legal for businesses to cite religious freedom when refusing service to gay and transgender people, for example a bakery that refused to bake a cake for a same-sex wedding.

As a member of Congress, Mr. Pence voted against employment nondiscrimination protections for gay and transgender people and also voted against the repeal of “don’t ask, don’t tell.”

His opposition to gay rights goes back at least to his first congressional campaign, in 2000, when he opposed same-sex marriage and the nondiscrimination laws that protected L.G.B.T. people.

He also argued for public funding of conversion therapy and said federal funding for H.I.V./AIDS treatment should be renewed only if the government could certify that no money went to “organizations that celebrate and encourage the types of behaviors that facilitate the spreading of the H.I.V. virus,” according to an archived version of his campaign website.

Mr. Brown [Jay Brown, of gay rights organization, Human Rights Campaign] called Mr. Pence “one of the most anti-L.G.B.T. politicians out there.”

And let’s not forget what his best buddy Donald had to say about him:

During a meeting with a legal scholar…When the conversation turned to gay rights, Trump motioned toward Pence and joked, “Don’t ask that guy—he wants to hang them all!”

I guess you need to be pretty out there for even Trump to recognize that your homophobia is laughably off the scale.

The meeting is taking place as I write. Who knows what is going on in there…

But at least the tabloid paps snapped them before they went inside: 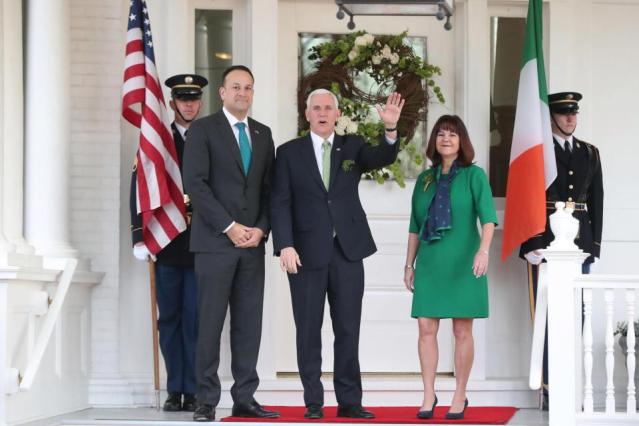 I’m sure both will treasure these few images of this momentous day.