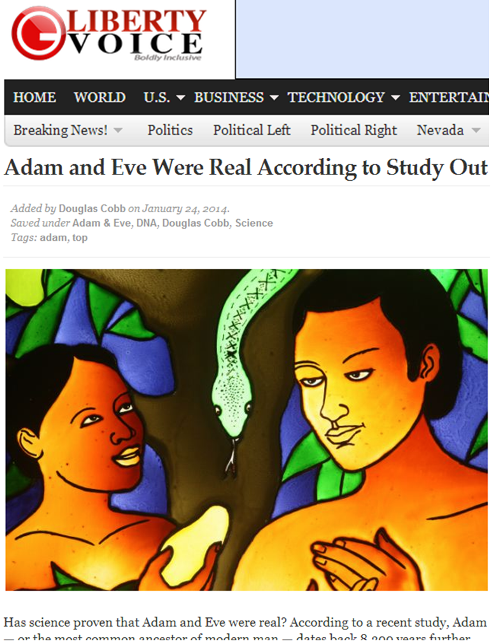 Here’s an interesting way to report the latest Science News: “Adam and Eve Were Real According to Study Out” declares the headline in the Guardian Liberty Voice. So, I assume a study has shown that Adam and Eve were real. Am I mad?

Listen carefully to what it says: “Adam and Eve Were Real.”

Has science proven that Adam and Eve were real? … The leader of the research team [was] Dr. Eran Elhaik … Dr. Elhaik doesn’t claim that there were one man called Adam and one woman called Eve [who] were the fathers and mothers of all of humankind.

Hmmm. So Adam and Eve were not real then. No white couple, guiltlessly naked, dwelling in a garden of Eden, encountering pure evil in serpentine form, and succumbing to temptation before spawning a human race addled by original sin. (To be honest, I had rather doubted that science could shed much light on that particular hypothesis.)

In sum, when a headline reads “Adam and Eve Were Real…”, fool on us for not realising that this must obviously mean: “Adam an Eve Were NOT Real…”

While we’re in this ballpark, here’s another interesting headline: “Was Noah’s Ark ROUND? 3,700-year-old clay tablet reveals giant boat was made out of reeds and bitumen.” That was the Daily Mail. According to them, “a controversial new theory claims that in fact, Noah’s Ark was round…” I suspect this all means that there’s evidence that Noah’s Ark WAS round, and made out of reeds and bitumen, and that this is a fact. But am I just being naive?

…he doesn’t think the tablet provides evidence the ark described in the Bible existed. He said it’s more likely that a devastating real flood made its way into folk memory, and has remained there ever since.

So not so much round, then, as non-existent.