I had the privilege of visiting India the other week. Seriously, no kidding, I totally did. To an outsider India is a highly complex and puzzling place, a complete assault on the senses, and so thought-provoking as to leave your brain sore. On the one hand, there’s all the entrepreneurship, the innovation, the economic super-poweriness, the sheer scale, and the omnipresent sense of creativity. But on the other hand…well, on the other hand are the shoeless and dust-encrusted kids, living, sleeping, eating, defecating, and basically growing up right there on the sidewalk. Along with their entire extended families. There they are as the cars drive by, toddling or crawling on hand and knee after some piece of litter as if they were playing with a toy tipper-truck on your sitting room floor. Every day of their lives.

So it’s good to see such an emphasis on science and scientific advancement in India. The country is thriving economically and expanding its education and R&D systems, and the socioeconomic indicators certainly look good for the future. They really do seem to have the whole works. They are big global players in pharmaceuticals, software engineering, telecommunications, agri-science, and so on. They even have a space mission.

And they also get their DNA the right way round. Have a look at this:

I took this photo myself on a street in New Delhi. It’s from a billboard right next to the Red Fort, a landmark of terrific significance to Indian history and politics. (Being the geek I am, I didn’t take a photo of the actual Red Fort itself.) Readers of this blog will know that sometimes the guys in marketing fall down on the whole direction-of-DNA thing. Rule-of-thumb time: if you can slalom down that spiral in a clockwise direction, you’re okay. But if you descend in a counter-clockwise corkscrew, you’re in some serious difficulty. So these guys have got it right. Full marks to them.

Of course, DNA graphics aside, you might have noticed that the billboard itself advertises something totally weird and dubious: a face cream called “Fair & Lovely“.

You know. As in “White-skinned & Acceptable“.

Here’s the whole billboard, from a pretty oblique angle: 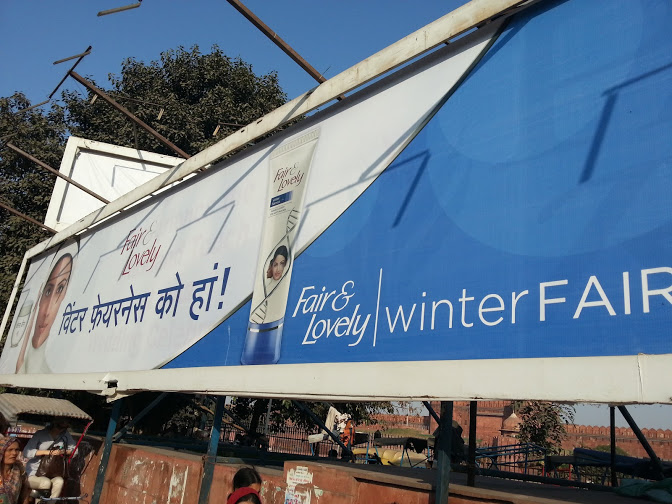 And here, thanks to the power of modern technology (namely, to CamScanner Pro for Android), is that image from the corner, all blown up and straightened out for you:

Yes. ‘Fair & Lovely‘ is a product that turns your skin white. And that’s pretty much the main point of it. You rub that stuff in, wait a while, and hey presto, you’re “lovely“. Awww! Let’s all aspire to one day not live on the pavement, but instead be rich enough to buy some of that stuff!

You might be wondering why the double-helix motif is being used in this advertisement at all. Most cosmetic face creams are simply moisturisers with tiny amounts of generally superfluous ingredients, which are then stridently promoted as containing all sorts of scientific bits and pieces as if to imply a range of scientifically-induced powers. But DNA? As in genetics? It’s hardly likely that this cream contains anything that interferes with your DNA. Maybe the imagery is intended to convey some kind of subliminal genetics-themed message (something like, “Your DNA is all wrong! But this cream can help you!“). A kind of eugenics movement. In a handy screw-top pot. That you rub on your face.

Or maybe it’s just yet another example of a cosmetics company piling on the science messaging in order to fool consumers into thinking there is actually some merit in their otherwise preposterous sales pitch.

It’s important to note that ‘Fair & Lovely’ is not a universally loved product in India. In fact, it has attracted a good deal of criticism over the years and has had a number of its marketing campaigns pulled following accusations that they promoted racist attitudes. Still looks to me like they are keeping it going, however.

For your information, ‘Fair & Lovely’ is produced by Hindustan Unilever, an Indian offshoot of the same Unilever who make stuff with familiar labels such as Hellmann’s, Knorr, Lipton, Surf, Toni & Guy, VO5, and many others. The mother company also produces Ben & Jerry’s Ice Cream, that holier-than-thou, honest-to-goodness, pure-as-the-driven-snow ice cream that we’re all supposed to choose because it’s so darned ethical.

Oh well. That’s the power of marketing I suppose.