When correlation does not imply “casualness” 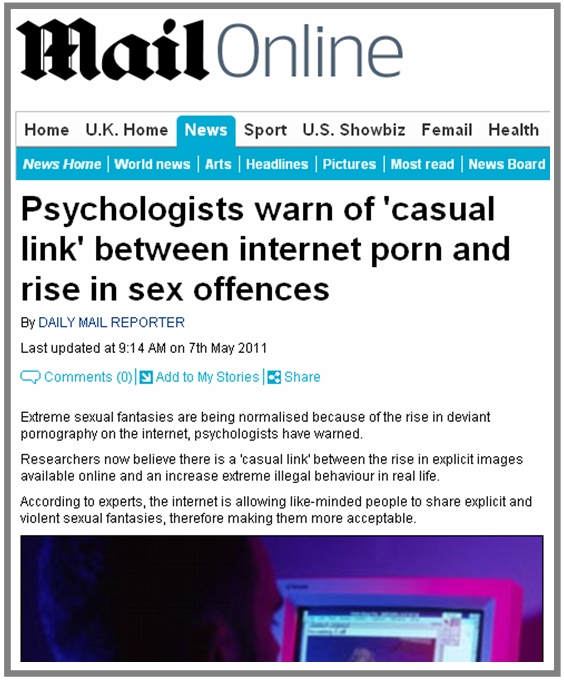 Yesterday, the Daily Mail published a news story with the following headline: “Psychologists warn of ‘casual link’ between internet porn and rise in sex offences”. Hmm, a “casual link” you say? Really?! “Casual”? (Thank you to @EvidenceMatters and @decaux for pointing this out to me on Twitter.) Now, I guess this particular typo has a higher probability than most (what with being immune to computerized spell-checks and all), so we just might feel a little sympathetic towards the journalist and sub-editors involved. At the same time, it all seems a bit strange. The so-called link was described as “casual” throughout the text of the report. The term “casual” also appeared in the caption for the illustrative photograph published with the story. And in the main headline, “casual” was presented in quotation marks. (This last point means it would have received targeted and cautious proof-reading as, in these litigious times, newspapers take extra care to avoid materially misquoting people they have interviewed.) Overall, the fact that the editorial process didn’t notice anything wrong with quoting a scientific study as supporting a “casual link” almost makes it look as though people just didn’t know any better. It’s nearly as if that — while willing to take on the task of reporting about scientific research — they just weren’t overly familiar with the obscure technical terms that might occasionally be required. Terms like “causal link”, for example.

The Mail updated the online version of the article after about 24 hours. However, you can still see the term “casual link” used in the title of the webpage it is permanently stored on, and in the page’s url address (have a look at the header/address bars at the top of the window/tab on your browser when viewing the story). As it turns out, this wasn’t the only presentational problem that was discovered. In the revised version, part of the photograph used to illustrate “internet pornography” has been pixellated. This isn’t surprising, seeing as the original picture featured clearly identifiable sexual nudity.

But perhaps the most significant difficulty with this story relates not to typographical errors or the accidental publication of graphic pornography. Rather, the real problem here relates to the rather less trivial issue of the story’s actual informational content. Little things like: the failure to pick up on monumental weaknesses in the research itself; the complete lack of reliability and/or validity in the reported findings; and the resulting dissemination of wholly unwarranted conclusions that, more than likely, are dangerously misleading.

The report begins by introducing the main findings in a somewhat dramatic fashion (I’ve gone with the version mentioning “causal” links myself):

Extreme sexual fantasies are being normalised because of the rise in deviant pornography on the internet, psychologists have warned. Researchers now believe there is a ‘causal link’ between the rise in explicit images available online and an increase [in] extreme illegal behaviour in real life.

This is a pretty bold assertion, because it appears to offer a conclusive verdict on a long-standing problem in this difficult research area: namely, the separating of cause from effect in the relationship between pornography and sexual crime. Ordinarily, when researchers discover that people with proclivities toward sexual crime also view pornography, how do they know which behaviour influences which? Does viewing pornography turn otherwise law-abiding citizens into sex criminals, or do sex criminals simply make more of an effort to seek out pornography? In the absence of any evidence at all, it seems reasonable to consider the second explanation as being more likely than the first (it is certainly the easier to defend). But whatever your judgement, it involves guess-work. Therefore, if new scientific research uncovers something conclusive on this issue – evidence that viewing pornography increases the risk of sex crimes, say – then this indeed would be justifiably newsworthy.

So how was the puzzle solved? Well, we are told that “the findings are based on research” conducted by a team of psychologists and criminologists, which involved the gathering of evidence from “a series of interviews”. Hmm. Okay, at a push, I am willing to concede that interview data can be informative in some scientific studies. However, interview data are much too flimsy to rely upon for a highly complex issue such as cause-and-effect relationships in clinical and/or criminological contexts. Simply put, there is no way to ensure that the information gathered will be reliable. Interviewees can misinterpret or forget important details. Or they can be motivated to distort them. And interview data will always be retrospective (which is a cumbersome way of pointing out that people in interviews talk about events only after they have occurred). What this means is that researchers will never be able to verify whether one event really “caused” another, because the particular sequence of occurrences reported (even if considered reliable) might just have emerged by chance.

However, there is an even bigger problem here. In this study, the “series of interviews” conducted by the research team were all with the same person. Seriously, this is actually the case: the research involved a series of interviews with one convicted paedophile, a man currently serving a 14-year prison sentence for multiple sex offences. Presumably, this person told the research team that viewing pornography on the internet turned him into a paedophile. And that was it. That’s the source of the research evidence described in this news story as supporting the highly controversial and heretofore disregarded claim that porn causes crime, a claim that is presented as being relevant to social policy, criminal justice, and legislative agendas.

It hardly takes a talent for science to realise that the events surrounding a single individual cannot provide a generalizable understanding of human nature. The reasoning that says that one person’s testimony can conclusively establish causality is extremely loose, and such a shortcoming should really be addressed in news reports of what is supposed to be scientific research. As it happens, the Daily Mail was not the only newspaper at fault here. The same uncritical description was presented when the research was covered by the Metro, the Sunday Mercury, and the Daily Telegraph (notably, in its ‘Science News’ section).

On second thoughts, perhaps the Daily Mail should change the headline back to what it was. Because, as evidence of causality goes, it is difficult to imagine a methodologically weaker study: the “link” established is very casual indeed.