I mean, how could anyone consider this to be racist? 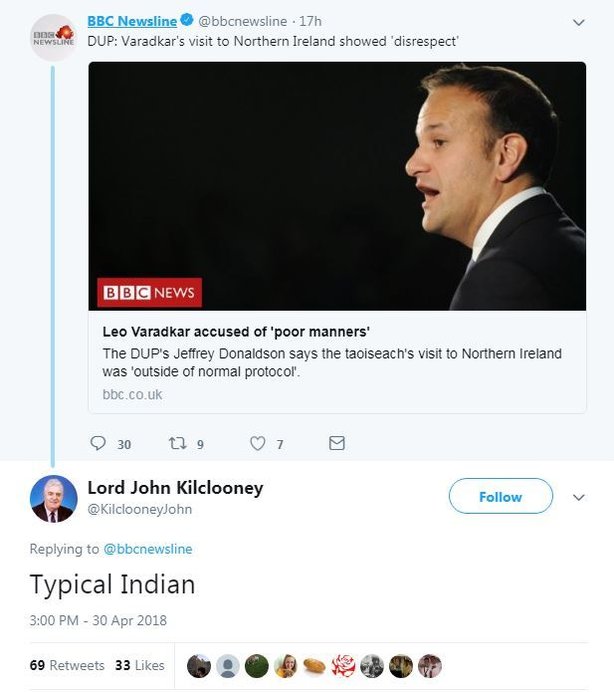 Two words making a generalization about a person’s race in the context of criticism of that person? No. John Taylor is definitely not a racist.

Using the clichéed phrase “Typical x” historically used by racists to dismiss ‘lesser’ races? No. Definitely not a racist.

Mr Taylor later tweeted: “I am certainly no racist and in particular have an admiration for Indians. A member of the British/Indian APPG, only yesterday I had a reply from 10 Downing St asking for a relaxation of visas for Indians.

So what was your point, John?

My point was that the PM had upset Unionists more than Irish PMs had!

Oh. So your point was that this Irish PM, who happens to have an Indian dad, was uniquely upsetting compared to past Irish PMs, who didn’t have Indian dads, and in your opinion he is a “typical Indian”, but that’s not because you’re racist, because, after all, you have said that you’re not a racist…

I guess it’s like the time in 2017 John Taylor referred to the Irish PM as “the Indian” and that wasn’t racist either:

Or the time John Taylor complained that Moeen Ali, the English cricketer born and raised in England who plays for England, was, er, not English (incurring the wrath of none other than Piers Morgan). That wasn’t racist either.

Oh shut up you racist old dinosaur. Moeen Ali’s more English than I am, and I was born in Guildford. https://t.co/LkeqjHLN7w

Or the various times John Taylor implied that Northern Irish Catholics were “not equal” or had impressed him with their “development”. No racist or bigoted undertones there at all.

Hmm, good to know that John Taylor is not a racist then.

Well, not a typical racist, I mean.