Wake up and smell the…woahhh! 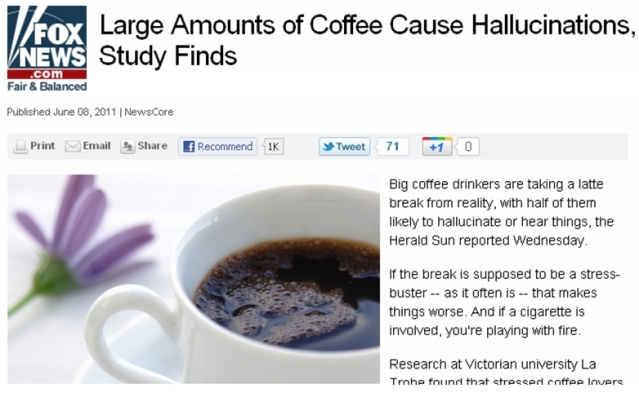 Let’s get the controversy out of the way first. In the interests of full disclosure, I need to reveal an interest. I consume coffee. There. I’ve said it. Now you may think there is nothing particularly strange about that. After all, some 80% of the world’s population consume caffeinated products every single day. And while coffee has many questionable effects on health, it is generally regarded as an uncontroversial beverage — certainly, in terms of public debate, it is far removed from hard liquor, tobacco, or Class A drugs. However, according to recent reports, we might have to change our views a little. In fact, according to the media, science has now shown the world that coffee has in fact the potential to interfere with mental states in very dramatic ways. Allegedly, the research shows that consuming large amounts of coffee makes you hear voices. Yes, you heard that correctly. Coffee is hallucinogenic! Wow, man. Heavy…

But wait! Does this mean that coffee should be banned or at least controlled? After all, other hallucinogens (such as LSD or ketamine) are proscribed largely because of their mind-altering properties. Stopping short of all-out prohibition, maybe we should just prevent coffee-drinkers from driving or from operating heavy machinery? How about teachers, doctors, and nurses? Shouldn’t they be barred from consuming coffee too? What if they start hearing voices while looking after children or treating patients? Don’t the powers-that-be get it?! The study showed that coffee is an HALLUCINOGEN for goodness sake!!! Except, well, it didn’t. Not really.

The study in question was published in the academic journal Personality and Individual Differences. The paper, which had a relatively whopping fifteen co-authors, described how 92 non-clinical participants were found to have hallucinated during an experiment. Of these 92 people, the sub-group identified as being the heaviest caffeine consumers and the most likely to experience daily stress were found to have hallucinated the most. Impressive-sounding stuff. However, there were some problems.

Firstly, the definition of “hallucination” here is quite idiosyncratic. Rather than tripping out wholesale, seeing dead Indians, or doing the full William S. Burroughs fandango, these participants were classified as having “hallucinated” if they pressed a button whenever they heard a fragment of White Christmas in the midst of three minutes of randomly distorted noise that was played into their ears via headphones. As there were actually no such fragments of music within the noise, the researchers concluded that anybody who thought they heard them must have been hallucinating. In fact, everybody in the study reported hearing at least bits of the song within the noise (this may well have been because the researchers had played White Christmas to the participants at the beginning of the experiment, and so its musical memory trace was likely to have remained jingling around their heads). Seeing as all the participants had pressed the button at least once, the researchers tested their coffee hypothesis on the basis of comparisons of the number of times each participant did so.

Therefore, in other words, instead of linking coffee consumption to hallucinations per se, the study actually linked it to the relative number of hallucinations ordinary people experienced during an ambiguous listening task. According to the researchers, we all hallucinate whether or not we drink coffee. It’s just that coffee-drinkers hallucinate more. 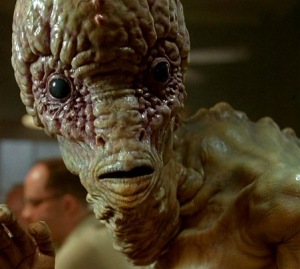 "Would you like that for here, or to take away?"

Hmmm. Now the idea that the entire population can be made to hallucinate at the drop of a hat may strike you as a bit surprising, if not utterly disturbing. Obviously, hallucinations must be a lot more common — and a lot less glamorous — than people generally believe. In fact, if this is all that hallucinations involve then maybe hallucinogenic drugs aren’t so bad after all? So instead of banning coffee, let’s just legalize LSD!

But were the participants in this study really hallucinating? Hallucinations occur when people experience a perception (i.e., a feeling that they have sensed something) in the absence of a sensation (i.e., the activation of a sensory organ by an external stimulus). In contrast, the effects in the coffee study seem to be more in the realm of auditory pareidolia. This is the term used to describe situations where random sounds are interpreted as being non-random. Famous illustrations of auditory pareidolia include effects known as electronic voice phenomena, as when some people claim they hear the words “Take care…take care…” when listening to this sound-clip:

However, the clip (see here for background) is really just a fragment of white noise; when people hear “Take care…take care…” it is because its fluctuating waves are falsely interpreted by the listeners’ brains as comprising a meaningfully structured sound event. In general, our brains are primed to extract patterns from fragmented sensory input (a type of perception known to cognitive psychologists as top-down processing). While this helps our brains to make efficient use of complex sensory information, it also means they are relatively poor at handling patterns that are truly random. Rather than acknowledging their randomness, our brains assume them to be non-random and automatically attempt to extract some kind of meaning. In essence, the coffee study looked at how participants extracted meaning from distorted noise, and so relates to the extent to which such top-down processing led them astray. As such, the participants’ errors constituted misinterpretations rather than hallucinations. In contrast, real hallucinations occur when people report perceptual experiences in the absence of any underlying sensory input at all.

Nonetheless, while not truly hallucinating, at least the heavy coffee drinkers were shown to commit more of these misinterpretations than the light coffee drinkers, right? Well, not exactly. When the researchers did the simple thing and compared heavy and light coffee drinkers, they found no statistically significant difference in their rates of button presses. Statistically significant differences emerged only when life stress was added as a variable. In other words, not all coffee fiends were especially prone to hearing White Christmas — just those who were also experiencing high levels of life stress. And that particular sub-group (high coffee and high stress) comprised just 16 participants from the overall sample of 92.

But perhaps the biggest problem with the whole study is that both coffee consumption and life stress were measured using self-report. There is simply no way to know whether people’s reports were accurate. This is extremely important because the whole concept of the study relates to coffee-drinking and the only reportable finding depends on life stress, but neither variable was measured in a verifiable way. Moreover, there are good reasons to suspect that people who report excessive coffee drinking or life stress might be psychologically different from other participants in ways that are highly pertinent. For example, it could be that the people scoring highest on these measures were the biggest thrill-seekers in the sample. Or maybe they were the ones most prone to exaggeration. Or maybe they were simply the most scatter-brained. If any of these contexts were true, it would not then be surprising if these participants were also found to be the ones most likely to make mistaken observations during a listening task. So no, this particular study does not show us that coffee drinking causes hallucinations. In fact, neither coffee drinking nor hallucinations were even verified as having occurred.

While there are many reasons to suggest that coffee products should carry health warnings, the prospect that espresso guzzlers might end up seeing pink elephants is simply not one of them.